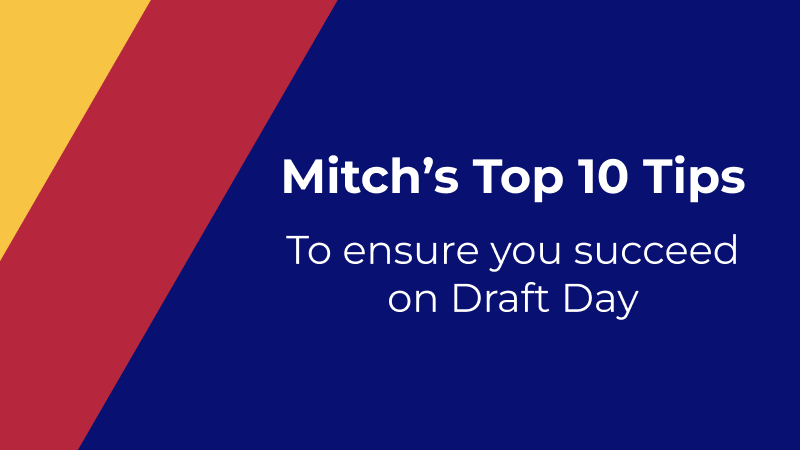 This seems obvious but it’s the most important piece of advice. If you’re reading this we’re no doubt preaching to the choir, but a pre-prepared draft list can make all the difference between serene drafting and panic stations. Whether you’ve got a spreadsheet, scrap of paper or better yet, a pre-prepared watchlist on the FPL site, having something to cling to when the heat is on will pay dividends for you right through to GW38.

2. Make sure your tech won’t let you down

Picture this – you’ve made the perfect draft ranking on a spreadsheet, you’ve put on a suit and tie because it’s draft day and you mean business. You settle into your comfiest chair with 10 minutes to spare before the draft kicks off. The laptop is fully charged and plugged in… then the wifi goes down. Suddenly, you’re scrambling to reset the router and running to the upstairs back bedroom to get some 3G signal. 20 minutes later you’re able to log in and find the likes of Firmino, Bamford and Nketiah in your squad. Having two forms of access to the internet via your phone and a computer will reduce this risk and mean you can handle whatever nature throws at you.

3. If you know who you want, choose fast!

Depending on how your draft has been set up (administrators can decide between 30 – 120 seconds for managers to make their selection) it’s in your interest to choose quickly. Why? The quicker you choose, the quicker the next manager is on the clock, and they may not be as prepared as you are (unless they’re also subscribed to Draft FC!). This means you can apply pressure and hopefully force a mistake.

4. There are plenty more goalkeepers in the sea

Experienced drafters will be scoffing at the idea of such a rookie error, but for newbies beware the temptation of the Ederson in round 2. We do an entire essay on the need to appreciate positional scarcity, but suffice to say, you won’t lose much by hanging on and waiting for a Fabianski or Schmeichel in round 7 (the difference between them and Ederson last season would be around 0.5 points a week). However, if you pass up on the option of Mount, Antonio or Coutinho, the next best mid/forward by the time your turn comes around again (which could be 18 picks if you draft 1st in a 10-team league) is much more damaging!

5. Handcuffing can get you out of jail

In fantasy sports, handcuffing is the idea that you select two players who occupy the same position for the same team. Examples would include Perisic and Sessegnon for Spurs, Matip and Konate for Liverpool or De Gea and Heaton in goal for Man U. This means you’re virtually guaranteed to have one of them play and get the points from that position. In our 2022/23 world of 5 substitutes, handcuffing isn’t as attractive as it used to be, particularly for outfield players, as you run the risk of one starting and the other being substituted on – resulting in a very underwhelming set of fantasy points. For goalkeepers however it can be very useful. If you are lucky enough to draft Alisson, having Kelleher means that if Alisson pulls his groin during the warm-up, you don’t miss out on your chance of a Liverpool clean sheet. This is particularly useful in larger leagues (11 or more) as there simply aren’t enough starting goalkeepers to go around.

6. Draft together if possible

Draft day is one of the best days of the year, right up there with Master’s Sunday, Christmas Day and the Champion’s League final. Part of the magic is seeing the joy in a rival’s eyes as he nabs Salah with the third overall pick or seeing the furrowed brow of a manager who has no idea what they’re doing (while receiving less than helpful advice from onlookers). Many draft leagues will have people scattered up and down the country, or have managers in different countries and even different continents – so as we’re all more than accustomed to, a group zoom call is equally as effective to honour the event as well it should be.

7. Put your money where your mouth is

There’s nothing worse than getting 10 weeks into the season and the manager at the bottom of the league has decided they’ve had enough. Not only is the integrity of the league compromised, but all the players they own are then inaccessible to trades and waivers for the rest of the season. The simplest way to prevent this is to have some financial jeopardy based on final positions. This doesn’t have to be any huge amount, but needs to be just enough that the incentive to win or lose is big sufficient. Worth putting your heads together just before the draft kicks off to decide.

8. Remember to think about Gameweek 1

It can be easy to be swept away by players who you think are going to have “a really big season”, but if they’re playing Man City and Liverpool in the opening games, do you need to get them on draft day? You might have had a dream that Declan Rice is going to score a dozen premier league goals this year, but with a game against the defending champions in GW1, you can probably wait and pick him up in the waivers before GW2. Looking at it the other way, you may not particularly rate Dan Burn as a defender, but with an opening fixture at home to Nottingham Forrest, he’s probably a sensible guy to grab on draft day, even if you have no plans of keeping him beyond the week.

It doesn’t matter if you’ve played for years or this is your first time, mock drafts can be very helpful in your preparation. Of course there isn’t the same pressure, but it’s the closest simulation you’ll get to the real thing and will give you a flavour of things to come. Maybe you thought you’d grab Havertz in the third round, but he’s consistently getting taken before? Maybe a certain name keeps cropping up in the later rounds that you hadn’t considered? It’s all useful data and will mean when the pressure is really on, you’ve been there before and are comfortable selecting from usual batches of players. For newbies it’s also useful to show how easy it is for your team composition to become very unbalanced if you don’t take any strikers in the opening rounds.

10. The league isn’t won and lost on draft day

It used to be said, you can’t win the league on draft day, but you can lose it. I disagree with this adage as I’ve seen plenty of mediocre draft days produce league winning teams. Is it harder? Of course, but this is where your pre-draft preparation will ultimately shine through. Do not build your season hopes on the chance of drafting Luis Diaz, because the odds are you won’t get him! Have faith in your prep and remember there are always gems to be found in the later rounds (and throughout the season!)